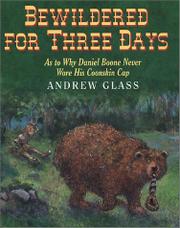 As to Why Daniel Boone Never Wore His Coonskin Cap

Today’s kids might not know the name of Daniel Boone (or what a coonskin cap is), but this original tall tale explains why Boone wore that distinctive hat as a boy, and why he stopped wearing it, too. Glass (The Sweetwater Run: The Story of Buffalo Bill and the Pony Express, 1996, etc.) has crafted another original tall tale in his series of self-illustrated picture books for older readers that each describe an exciting fictionalized event in the younger days of an American folk hero. In this well-written tale full of frontier-flavored expressions, young Daniel Boone is growing up as a Quaker boy in Pennsylvania with a Delaware Native American companion who helps Daniel become an accomplished woodsman at a young age. On one of Boone’s solo rambles through the forest, he is surprised by an enormous “malodorous” bear who takes off with the coonskin cap (which was probably quite malodorous as well!). Daniel tracks the bear until he is chased by a group of Native Americans who shoot arrows at him and throw a tomahawk or two, terrifying the young Boone. Alert readers will notice that they are carrying Daniel’s cap, trying to return it to him. In the best tall-tale tradition, Daniel leaps off a cliff, swims down a river, and hides in a log with a raccoon family (the reason for giving up the coonskin cap), before finding his way back home after being “bewildered for three days.” Glass’s glowing full-page and double-page illustrations in colored pencil and oil pastels capture Daniel’s boisterous nature and action-packed adventures, but some will object to the rather stereotypical portrayal of the Native Americans in both art and text. An author’s note includes extensive information on the sources and research for the story; a bibliography and map of key sites are also included. (Picture book. 6-10)