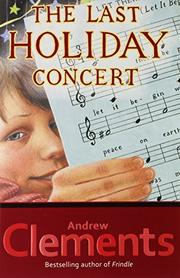 A sixth-grader and an inexperienced teacher both learn something from each other in Clements’s newest teachable-moment-driven school tale. Hart Evans has always, and effortlessly, been Cool—a talent that backfires when his control-freak music teacher, Mr. Meinert, throws up his hands and leaves it to the unruly school chorus to elect its own director for the upcoming Holiday Concert. Hart surprises both Mr. Meinert and himself by rising brilliantly to the occasion. Clements stirs a few side issues into the pot—for one, Meinert and the other arts teachers are being laid off on January first—but his focus being Hart’s introduction to group dynamics and the management thereof, complications of plot or character cause only minor ripples. Having learned the value of listening, of running things democratically, and of knowing when to seek help, Hart and Meinert engineer a quirky, rousing triumph—that, no, doesn’t save Meinert’s job, but does leave everyone involved, readers included, with both good feelings and the idea that both young people and adults are sometimes guilty of underestimating each other. (Fiction. 10-12)