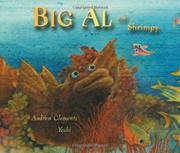 by Andrew Clements & illustrated by Yoshi

Clements gives the ugly-but-brave hero of Big Al (1990) a tiny-but-clever buddy in this companion volume. While the other fish play tag, Big Al and his diminutive new friend venture to the edge of the dark, scary Big Deep. When a rock traps Big Al and carries him over that edge, it’s up to Shrimpy to organize a rescue. Just as Clements’s new text echoes his previous one in tone and construction, so Yoshi again uses paint, batik, and embroidery to create blue-lit, deeply shadowed seascapes, populated by brightly colored tropical fish and flora. How Shrimpy persuades the other fish to follow him down into the Big Deep is never made clear, so the episode’s internal logic isn’t quite as watertight as that in Leo Lionni’s Swimmy (1966)—still, it’s good to see Big Al back, and children are always receptive to the idea that size isn’t everything. (Picture book. 4-8)