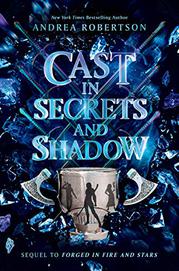 CAST IN SECRETS AND SHADOW

From the Loresmith series, volume 2

In the sequel to Forged in Fire and Stars (2020), Loresmith Ara continues to seek out the gods so she can access the Loresmith Forge.

Betrayed by Prince Eamon, Ara and her companions push onward. The hunt for the gods’ sacred sites takes them across new landscapes—from tropical jungle to farmland to treacherous fens—and illustrates the urgency of stopping the Vokkans from devouring the world. Meanwhile, Liran and Eamon offer their views of ArchWizard Zenar through stories of treason, regrets, and atrocities. The at-times overwritten and purple prose, combined with a lengthy scavenger-hunt storyline, promises a long-haul series. In between bursts of action as the characters face their trials, the quest serves as a backdrop for psychological storylines. Some threads, like those of characters who are grappling with the complicated feelings of being betrayed by a loved one, are more successful than others, such as the interruption of Ara’s increasingly steamy romance. Romance is a heavy focus, and there is a secondary romance between two women. Despite the emphasis on weapons, finding alternatives to violence when possible is a refreshing theme. Racial diversity is linked to fantasy-world geographical areas and doesn’t seem to have real-world analogs; characters have a range of skin tones from light to dark.

A world-expanding improvement on its predecessor.