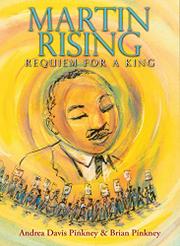 Requiem for a King

The multiaward-winning Pinkneys’ requiem lovingly explains in a set of “docu-poems” the events surrounding Dr. Martin Luther King Jr.’s assassination, particularly the Memphis sanitation workers’ strikes that brought him to the city where he eventually died.

The author humanizes King through the love he has for his family and movement comrades (including an April 4, 1968, pillow fight with his brother, Andrew Young, and Ralph Abernathy) as well as the viral bug he suffers with as he gives his last, prescient, and momentous “I’ve Been to the Mountaintop” speech. The illustrator, blending influences of Marc Chagall and Norman Lewis, gives the story a loosely drawn, vibrantly warm, watercolor haze, which, with halos of yellows and oranges and even wings, give King and his family an almost beatific, if not saintly, glow, even in their sorrows. The character of Henny Penny, who is a blend of the fabled chicken and a wise black grandmother, provides the Greek-chorus narration in a device that is understandable if sometimes-distracting. Catholicism creates hagiographies to explain their martyrs’ and other saints’ deaths, whether history concurs with their feats for the faith or, in some cases, their very existences. Even as U.S. black communities wrestle with Dr. King’s personal foibles, media-glossed images, and complex messages, here readers have a children’s book in which adults may also find succor, if not inspiration, considering the current reverting-to–pre–Civil Rights administration.