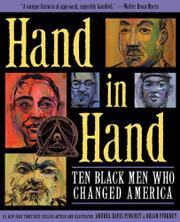 Addressing the appetites of readers “hungry for role models,” this presents compellingly oratorical pictures of the lives and characters of 10 African-American men who exemplify a “birthright of excellence.”

Each of the chronologically arranged chapters opens with a tone-setting praise song and a commanding close-up portrait. From Benjamin Banneker, whose accusatory letter to slaveholder Thomas Jefferson “socked it straight / to the secretary of state,” to Barack Obama, who “turned Yes, we can! into a celebration call,” the gallery is composed of familiar names. Instead of rehashing well-chewed biographical fodder, though, the author dishes up incidents that shaped and tested her subjects’ moral and intellectual fiber along with achievements that make her chosen few worth knowing and emulating. Carping critics may quibble about the occasional arguable fact and an implication that Rosa Parks’ protest was spontaneous, but like Malcolm X, Pinkney has such “a hot-buttered way with words” that her arguments are as convincing as they are forceful, and her prose, rich as it is in rolling cadences and internal rhymes, never waxes mannered or preachy.

A feast for readers whose eyes are (or should be) on the prize, in a volume as well-turned-out as the dapper W.E.B. Dubois, who was “more handsome than a fresh-cut paycheck.” (timeline, index, lists of recommended reading and viewing) (Collective biography. 10-15)