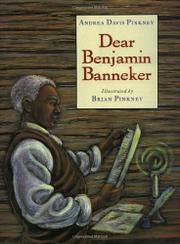 This outline of the accomplishments of the distinguished African-American astronomer and mathematician focuses on the landmark publication of his first almanac and an eloquent 1791 letter to Thomas Jefferson. Banneker protested ``the almost general prejudice and prepossession which is so previlent [sic] in the world against those of my complexion'' and criticized Jefferson for holding slaves, detained ``by fraud and violence,'' despite his claim, in the Declaration of Independence, that ``all men are created equal.'' The letter and Jefferson's reply were printed in Banneker's popular second almanac. Compared to the gracefully phrased excerpts of Banneker's and Jefferson's letters (Why not append the entire texts?), Andrea Pinkney's (Seven Candles for Kwanzaa, 1993, etc.) determinedly simple narrative seems choppy. Still, the text is serviceable; and Brian Pinkney's glowing paint-and-scratchboard illustrations vibrate with dignity and purpose. (Book-of-the-Month Club featured selection) (Biography/Picture book. 5-10)