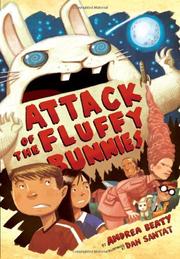 ATTACK OF THE FLUFFY BUNNIES

Twins Kevin and Joules Rockman are happy they’re spending a week at Camp Whatsitooya on the shores of Lake Whatsosmelly, because it means they don’t have to accompany their parents to the International SPAMathon. Their parents would (and do) put the barely edible meat-like substance in everything. The camp’s pretty lame, but craft-crazed Ms. Jones, her two batty counselors and a passel of oddball campers become the least of the twins’ worries when people start vanishing and brain-controlling monster-bunnies attack. Thank goodness Kevin’s studied survival tactics in awful horror movies and Joules is proficient with pointed sticks. With the help of clueless Nelson and a secret ingredient you can probably guess, the Rockman twins attempt to save the world from slavering, fanged, man- (and candy-) eating fluffy bunnies. Beaty’s tale of high silliness is sure to please, and it’s dotted with Santat’s mini-comics and spot illustrations, which move the story along. If at times the reach for a larff is a bit of a stretch, it’s all in fun. The hint at a possible sequel will have humorous-adventure lovers asking. (Adventure. 7-10)