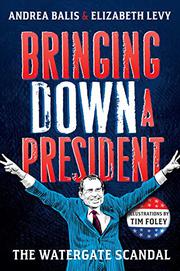 BRINGING DOWN A PRESIDENT

President Richard Nixon’s downfall as a result of the Watergate scandal is vividly recounted in a screenplay-style narrative.

In Balis and Levy’s narrative, contextual paragraphs identified as “Fly on the Wall” are separated from direct quotes taken from Nixon, his administration, the Watergate burglars, reporters Carl Bernstein and Bob Woodward, and members of Congress. The purpose of choosing this narrative format is never explained, nor is it readily apparent. Many of Nixon’s lines and those of his staff come from transcribed Oval Office recordings. It’s inventive all right, but there are some odd inclusions. Is it necessary to know that Howard Hunt urinated in a whiskey bottle while hiding in a closet? What use is it to know what John Dean’s wife wore on each day during his weeklong testimony before Congress? Why do the authors need to identify who ate what when Nixon, John Mitchell, and Bob Haldeman met for lunch? Perhaps worse are the exclusions. In recounting Nixon’s political career, the authors note he made a name for himself “fighting communists with Senator Joe McCarthy,” but there is no explanation of how fraudulent and destructive McCarthy’s anti-communist crusade was, nor that it was specifically Nixon’s role in the Alger Hiss trial that got him noticed. In lieu of photographs and archival material are Foley’s interpretive black-and-white illustrations, which bring a graphic-novel–esque flair to the design.

An intriguing but flawed attempt at narrative innovation.