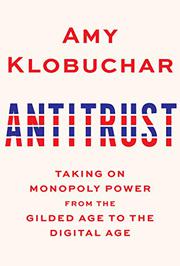 The senior senator from Minnesota offers a thorough history of trustbusting in America and an urgent plea for stricter enforcement.

Klobuchar is on a mission to strengthen and enforce federal antitrust laws in order to halt the growing consolidation of big business, which thwarts competition and exacerbates economic inequality. This book, unlike her standard-issue political memoir, The Senator Next Door (2015), is both a diligently researched history lesson and a well thought out plan, meticulously delineated, to take on “corporate consolidation, Congressional inertia, and the conservative courts.” Showcasing her hardworking Midwestern roots, the author moves from her childhood in a Minneapolis suburb—her father wrote for the Star Tribune, and her paternal grandfather was a miner, a profession for which strong unions were crucial—to the initial growth of the Granger movement in response to grain price monopolies in the heartland. The first federal legislation was put forward by Ohio Sen. John Sherman in 1890, but it was not enforced until Theodore Roosevelt assumed the presidency and sought to dismantle the Northern Securities railroad monopoly, among many others. In 1911, Howard Taft broke up Standard Oil, thanks in large part to Ida Tarbell’s groundbreaking exposé, which set the stage for the passage of more antitrust legislation—e.g., the Clayton Antitrust Act and Federal Trade Commission Act, both passed in 1914. Yet the progressive era gave way to war-caused fatigue and the reopening of certain legal loopholes. In addition to sketching the beliefs of the Chicago versus Harvard schools of thought on monopolies, Klobuchar examines key cases in the digital age (AT&T, Microsoft), alarming mergers in high tech and health care industries, and suits brought against Google and Facebook. The author also clearly shows how the previous administration’s pro-business stance led to significant reductions in important resources like antitrust lawyers. The final section, “The Path Forward,” is a staggeringly detailed, impressively documented and presented “list of the Top 25 recommendations to improve competition in our nation.”