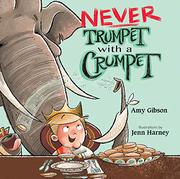 NEVER TRUMPET WITH A CRUMPET

A queen invites a host of animals to tea. Will they mind their manners?

In lively rhyme, Gibson follows a smattering of guests to the royal palace. An elephant, a giraffe, a moose, and more tromp inside, ready for tea. But they aren’t sure how to behave. Gibson cautions readers to not follow the animals’ instincts. “Sip your tea. Don’t lap it up. / No blowing bubbles in your cup. / Show courtesy. Don’t take too much, / but always take the one you touch.” The queen becomes increasingly appalled by the spills, sprays, and mayhem, but the young prince is delighted in watching others break the rules (ones that have surely been told to him many times). A few messages get muddled with the animal references: “Sit up straight. Don’t slump. Don’t slouch. / Lay your napkin on your pouch.” (A small opossum does have a napkin across her lap in the illustration but is also hanging upside down above the table with her head turned a full and alarming 180 degrees; this may leave readers wondering more than just exactly where their pouches are). Harney dresses the queen in furs and frills, with a high, white bouffant wig and pointed features. Her son is more cherubic, with a twinkle in his eye to show his penchant for mischief. They (the only two humans in evidence) both present white.

A raucous rumpus of royal persuasion.