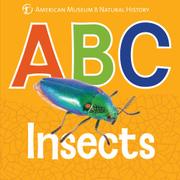 From the AMNH ABC Board Books series

A boldly designed, oversized board book features a creepy-crawly for every letter of the alphabet.

Each capital letter sprawls across a half or whole page, accompanied by a realistic image of an insect beginning with that letter, the name of that insect, and a fact or two about its habitat or behavior. The extra-large letters paired with vivid images of insects against solid backgrounds make for a visually striking presentation. Familiar creatures such as fireflies and grasshoppers appear alongside less-obvious selections, such as jewel beetles and water scorpions. The board-book format, the ABC arrangement and the insect images will appeal to toddlers, while a slightly older crowd will be better able to understand and appreciate the concepts and sometimes somewhat gruesome facts included with each insect, such as, for example, the following: “Kissing bugs are part of the assassin bug family. They feed on the blood of mammals, birds, and reptiles.”

This ABC book with its parade of interesting insects will have special appeal for budding naturalists, who will be inspired to head outdoors and root around in the dirt to see what exciting creatures they might uncover in their own backyards.