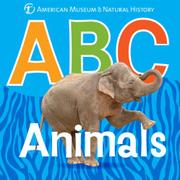 From the AMNH ABC Board Books series

by American Museum of Natural History

The stable of animal alphabet titles gets a little more crowded with this new contribution from the American Museum of Natural History.

This sturdy, oversized offering presents large, brightly colored capital letters accompanied by a photograph of an animal whose name begins with each letter and a factoid about that animal. A chimpanzee, for example, hangs upside down from a large letter C against a bright orange background. The text reads: “Chimpanzees kiss when they meet each other.” Placed against a solid background and next to enormous letters, the animal images are visually striking, but they definitely lose a sense of scale. The bright blue morpho butterfly, for example, is nearly as large as the chimpanzee it shares a page with. Though some of the selected animals will be familiar to kids—such as the lion, penguin, tiger and zebra—other, more exotic creatures abound. Readers will find, for example, that O is not for owl or ox, but for okapi, an animal with legs “like a zebra’s” but “more closely related to giraffes.” Aside from a couple of duds, the one- to two-sentence facts provided about each animal are generally kid-friendly and interesting.

Best for animal-obsessed preschoolers who have long mastered lions, tigers and bears and are ready to progress to nudibranches, quetzals and X-ray tetra fish. Oh my. (Board book. 2-5)