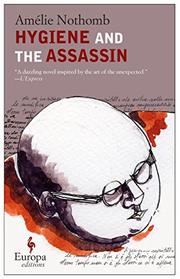 HYGIENE AND THE ASSASSIN

It was originally published in 1992, when Nothomb was 25; this is its first English translation. She has produced a slew of novels since then (Tokyo Fiancée, 2009, etc.) and won considerable acclaim in France. Her debut, set in 1991 as the Gulf War begins, features a Nobel prizewinner so obese he must use a wheelchair. His prototype is another grotesque glutton, the Ubu of Alfred Jarry’s Ubu Roi, an early Absurdist drama. Prétextat Tach is a sacred monster. When word gets out that the reclusive 83-year-old Nobelist is dying from a rare cancer, he is flooded with interview requests. The novel is comprised of five separate interviews. Tach is not an easy subject. He breaks off his first four sessions. One of the journalists exits vomiting. He enjoys letting insults fly, and they’re not funny (“Women are filthy slabs of meat”). This from a virgin with “a Ph.D. in masturbation.” Still, we do learn a few things. From ages 23 to 59, he wrote nonstop; after that, zilch. All he’s done for the last 24 years is eat and watch TV (just the commercials). He’s famous because he’s unread, except by “frog-readers” who absorb nothing. With the fifth journalist, everything changes. She’s the first woman. She even has a name (Nina). Unlike those lazy males, she’s done her homework, having read all 22 novels and researched his childhood. And she’s fearless, forcing Tach to apologize for an especially egregious insult and eventually spill the beans about that fateful summer day in 1925 when his beloved cousin died. By the end, it’s Nina who’s calling the shots. The dramatic ending suggests the novel might have worked better as a play, with actors breathing life into the sometimes monotonous back-and-forth.

It’s good to know that after this bold but flawed debut, Nothomb has gone on to a fine career.