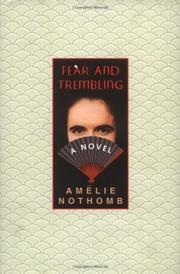 A young Western woman's experience of culture shock and psychological panic take frantic comic form in this highly entertaining, if rather slight, prizewinning eighth novel (first published in 1999 in France) from the popular author of The Stranger Next Door (1998). Narrator Amélie's employment with a monolithic Japanese corporation (an import-export firm that seemingly "bought and sold everything on the entire planet") consists of a series of humiliations in which she's abused for her ignorance and demoted to "lavatory attendant," among other indignities, before the end of her contract year frees her from the terrors of Oriental efficiency. Nothomb doesn't exactly end the novel, or say anything new about Eastern vs. Western attitudes, but Fear and Trembling (a perfect title) is filled with both droll observations and wry bitchy gags. It ought to be even more fun as a movie.