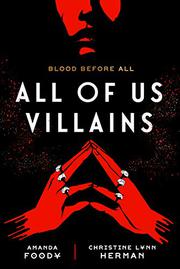 ALL OF US VILLAINS

From the All of Us Villains series, volume 1

A bloody tournament will determine whose family controls the only high magick in the world.

Until someone spilled the city of Ilvernath’s dark secret in the anonymously authored book A Tradition of Tragedy, the world thought that the high magick was gone. Instead, seven families are locked into a curse tournament, providing a child every 20 years to fight for exclusive control over it. Rotating third-person narration follows monstrous favorite Alistair (of the sinister and most winningest Lowe family), paparazzi darling and talented spellmaker Isobel (of the Macaslan family, who are viewed as distasteful vultures), brains-and-brawn underdog Gavin (of the Grieve family, a lost cause that’s never produced a winner), and born-for-heroism Briony (of the respected Thorburn family). Prior to the tournament’s starting, exquisite worldbuilding shines as the characters navigate family stories and outsiders trying to influence the tournament and deal with the spellmakers and cursemakers who equip the champions. One cursemaker in particular puts ideas in the aspiring champions’ heads about whether the tournament’s curse can be changed—or broken. The competitors teeter wildly between heroism and villainy, especially once the tournament starts and their preconceived ideas of themselves and each other are challenged in lethal combat. Of the seven champions, Finley has dark skin and curly black hair, while the rest are pale; among background characters there’s ethnic diversity and casual queer inclusion.

So bespelling that the cliffhanger ending will feel like a painful curse.