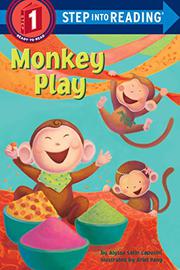 No matter how playful they are, the frolicking monkeys in Capucilli and Pang’s collaboration fail to make this beginning reader a success.

Although the text employs good controls around vocabulary, its central problem is that it lacks sufficient rhythmic discipline. This is immediately apparent with the opening lines, which read, “Way up high, / in a big palm tree, / sits one little monkey”; subsequent lines do not ameliorate the flawed cadence. Cartoonish, digitally rendered illustrations depict monkeys cavorting among South Asian musicians, merchants, spice jars and then a bevy of animals from the “royal zoo.” Although it’s refreshing to see references to the South Asian setting in text and illustrations, ultimately there is little story apparent to engage readers in the monkeys’ play. This is a fatal flaw. Emergent readers may be able to decode the text, but it gives them too little motivation to want to read or reread it.

The monkeys may be playful, but this title isn’t as much fun for new readers as it should be.