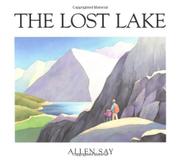 When Luke (who might be as young as six or as old as ten in different illustrations) spends the summer with Dad, he's virtually ignored—until the morning Dad suddenly announces that they're going camping at Lost Lake, a spot Dad fondly remembers as solitary. When it turns out that Lost Lake has been found by others, Dad and Luke lug their packs another day's journey through the California mountains—and then find another lake for just the two of them to share. This oriental Dad is almost excessively taciturn, yet he and Luke do become more companionable in the course of their trek. But Say's spare, meticulously composed watercolors are the book's outstanding feature.