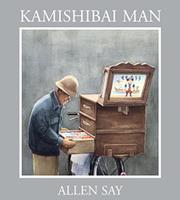 Kamishibai means “paper theater” in Japanese, and when Caldecott artist Say was a boy in Japan in the 1940s, a “kamishibai man” on a bicycle used to sell sweets and tell serial tales of heroes and heroines, using picture cards and a wooden stage. This nostalgic story begins when Grandpa, once a kamishibai man, gets a hankering to resurrect his show. Unfortunately, it’s been so long he finds himself in an unrecognizable city with tall buildings and rude drivers. Dismayed, he parks his bike in a vacant lot and begins to recount not the beloved “Peach Boy,” but his own story of how his show was eventually replaced by television (initially referred to as denki, or electric kamishibai!). Soon enough, Grandpa’s surrounded by a crowd of adults who remember him from their childhood, and, ironically, he ends up on the evening news. Say effectively incorporates two illustration styles here—lovely soft watercolors and a more cartoonish style for flashbacks to the heyday of kamishibai. A fascinating window on a bygone art form. (Picture book. 6-10)