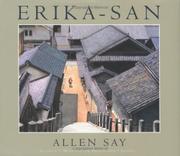 Say’s hallmark watercolors, beautifully composed and superbly detailed, illustrate this slightly unsettling shift of homeland. As a small child, Erika—white, probably American—is enraptured by a framed Japanese print on her grandmother’s wall. She yearns to move to the cottage in the picture, studies Japanese for years and secures a job in Japan after college. But Tokyo is too populated for her taste, and, wanting somewhere quieter, she requests “old Japan.” Her longing for a timeless land imagined from a childhood picture would better suit a fable than a realistic story about a real country; here it seems to reduce Japan to Erika’s fantasy. Friend-cum-fiancé Aki inquires whether Erika’s grandfather was a soldier when in Japan, but Erika neither knows nor cares, making World War II seem less irrelevant than ignored. Erika finds her romanticized Japan, complete with kimono, tea ceremony lessons and a farmhouse that Say paints gorgeously—in the same hues and values as the old print. Expert angles and a touching sense of stillness make this piece visually masterful even while conceptually disquieting. (Picture book. 5-7)