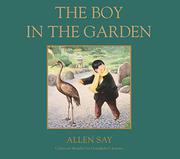 THE BOY IN THE GARDEN

Say is at the height of his artistic achievement in this tale of a little boy named Jiro and the powerful impact that a story has on him. It opens with a retelling of “The Crane Wife,” with a heading telling readers that this is “the story that Mama read to Jiro.” He recalls the tale about “the crane that the woodcutter saved from the trap” when he sees a crane statue in a family friend’s garden and then imagines a teahouse on the property’s outskirts to be the woodcutter’s cottage. A woman arrives, prompting Jiro to ask if she is the Crane Woman, but she just smiles, feeds him and cares for him, praising his imagination. A series of dreamlike paintings done in the Caldecott winner’s customarily precise and beautifully lit watercolors blurs the lines between reality and fantasy and limns Jiro’s conflicted emotions as he seems to enter the story that bonds him to his mother, only to awaken to his father’s voice telling him it is time to return home. This is a beautiful, moving, quietly mysterious read, ripe with possibilities for interpretation and contemplation. (Picture book. 5-8)