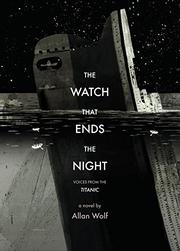 THE WATCH THAT ENDS THE NIGHT

Twenty-four voices—of passengers, rats and even the iceberg—evoke the human tragedy of the ill-fated voyage.

Titanic was a floating city, “the largest moving thing on the planet ever made by man.” She sank quickly on the night of April 14-15, 1912, and only 712 of the 2,207 passengers survived. Wolf brings the history and, more importantly, the human scale of the event to life by giving voice to the players themselves—the captain, the lookout, the millionaire, the socialite and various workers and passengers representing all classes of society that floated to their doom. The undertaker, out of Halifax, is the first voice, penultimate voice and intermittent commentator, gathering floating clumps of corpses in “a dead man’s sad regatta.” The iceberg, the voice of the ages, floats with a primordial indifference… but with a plan. Rats have the last word, as they scurry off to “follow the future / follow the food.” As he did in New Found Land: Lewis and Clark’s Voyage of Discovery (2004), Wolf draws on a prodigious amount of  research to fully realize each character; they are real people just telling their stories, all the more poignant because readers know their fates and recognize prophetic comments along the way. Extensive backmatter includes character notes, a Titanic miscellany and a large bibliography with books, websites and audio resources for the many readers who will want to know more.

A lyrical, monumental work of fact and imagination that reads like an oral history revved up by the drama of the event.