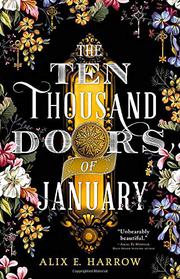 THE TEN THOUSAND DOORS OF JANUARY

An independent young girl finds a blue door in a field and glimpses another world, nudging her onto a path of discovery, destiny, empowerment, and love.

Set at the turn of the 20th century, Harrow's debut novel centers on January Scaller, who grows up under the watchful eye of the wealthy Cornelius Locke, who employs her father, Julian, to travel the globe in search of odd objects and valuable treasures to pad his collection, housed in a sprawling Vermont mansion. January appears to have a charmed childhood but is stifled by the high-society old boy’s club of Mr. Locke and his friends, who treat her as a curiosity—a mixed-race girl with a precocious streak, forced into elaborate outfits and docile behavior for the annual society gatherings. When she's 17, her father seemingly disappears, and January finds a book that will change her life forever. With her motley crew of allies—Samuel, the grocer’s son; Jane, the Kenyan woman sent by Julian to be January’s companion; and Bad, her faithful dog—January embarks on an adventure that will lead her to discover secrets about Mr. Locke, the world and its hidden doorways, and her own family. Harrow employs the image of the door (“Sometimes I feel there are doors lurking in the creases of every sentence, with periods for knobs and verbs for hinges”) as well as the metaphor (a “geometry of absence”) to great effect. Similes and vivid imagery adorn nearly every page like glittering garlands. While some stereotypes are present, such as the depiction of East African women as pantherlike, the book has a diverse cast of characters and a strong woman lead. This portal fantasy doesn’t shy away from racism, classism, and sexism, which helps it succeed as an interesting story.

A love letter to imagination, adventure, the written word, and the power of many kinds of love.