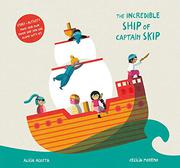 THE INCREDIBLE SHIP OF CAPTAIN SKIP

Nautical misadventures transform a ship in this moderately embellished version of a paper-folding tale best known as “The Captain’s Shirt.”

Following simple directions given at the beginning, readers can fold a paper boat and voyage along as Capt. Skip enlists a crew and sets sail into a succession of storms and other disasters that rip off the ship’s bow, stern, and upper mast. This leaves a wreck that Skip and her crew must abandon, hopping into lifeboats as the ship sinks with a “glub, glub, glub, glub.” During the adventure, various onlooking birds and animals issue instructions to readers to, for example, “tear off the top part of your paper ship,” so that at the end, when the damaged paper boat is pulled as the inserted diagrams show, it suddenly turns into a shirt. In bright and bouncy illustrations that appear to have been done in a mix of silkscreen and paper collage, Moreno pays close attention to diversity, as each member of the five-person crew is differently clad and colored (including blue). While one sports a beard and two (one with a wooden prosthesis) seem to present as women, the others are gender ambiguous. The brown-skinned skipper, who is likewise ambiguous as to gender presentation, is referred to with the female pronoun in Ross’ translation but is “el capitán Marco” with the same art in the original Spanish edition, which publishes simultaneously in the U.S.

A laudably inclusive version of a literally ripping yarn.