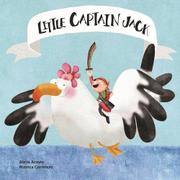 From the Little Captain Jack series

A pirate captain so tiny he can be stuffed in a rival captain’s pocket discovers that greatness can come in any size or shape.

That conclusion, though worthy, doesn’t have much connection to the actual story, but it’s so good-natured most readers won’t mind. Being so dinky that his own crew can’t hear his commands, Little Captain Jack is finally driven to tears when Pirate Badlock ends a shipboard battle by picking him up and chucking him into the “cellar.” But after he manages to escape with help from a mouse and a sea gull, Jack rejoins his delighted crew and “finally felt proud and happy to be Little Captain Jack!” Outfitted with wooden swords and, in Badlock’s case, a fork rather than a hook at the end of one arm, the fierce but not very dangerous-looking pirates here include dogs, cats, and birds as well as men and women both brown or (more commonly) pink of skin. Eye patches and lopped limbs can be seen on every, er, hand, and one rosy-cheeked young tar even gets around in a wheelchair, begad. Carretero clearly enjoys making the most of Little Captain Jack’s diminutive size, positioning him in the shadow of an enormous sneaker in one scene and dwarfing him by his mouse friend in another.

Themes of diversity and self-esteem not only fill the sails, but keep firm grasp of the wheel in this nautical caper.