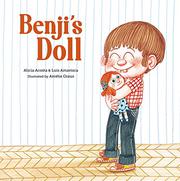 From the Égalité series

More than anything, a little boy wants a doll.

Freckle-faced, buck-toothed Benji (a little White boy who bears a curious resemblance to Howdy Doody) has made birthday wishes, Christmas lists, and even tossed all of his coins from his piggy bank into a fountain, desperately hoping for a toy doll. His best friend, Jenny, has one (the doll has the same dark brown skin tone as Jenny), and Benji loves to care for it. One day, Mom and Dad give him a large present. An aptly placed page turn keeps readers in suspense, wondering what choice the parents have made. It’s a doll! Benji rushes to the park to show it off. Unfortunately, a bully, a brown-skinned boy named Pablo, grabs the doll and squeezes it so hard one of the eyeballs pops out (a dramatic scene). All seems hopeless, but Pablo (who feels remorse and, it turns out, just didn’t have the social skills to enter the group’s play) comes up with a clever reparation. Facial features are exaggerated in this Spanish import—eyes are large, noses upturned, ears stick out—but no one exudes a more toothy joy than Benji when his wish for a doll finally comes true. Some readers may wonder what took Mom and Dad so long since they are clearly not opposed to giving their son a doll. Still, though slight on story, it’s big on heart and makes for a long-overdue replacement for the venerable William’s Doll, by Charlotte Zolotow and illustrated by William Pène Du Bois (1972). The original, Spanish edition, La muñeca de Lucas, publishes simultaneously.