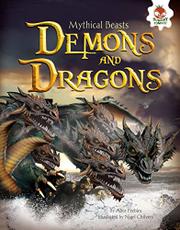 From the Mythical Beasts series

Ten monsters from myth and legend take a bow—each furnished with competitive scores in five monstrous characteristics and a portrait in full, lurid melodramaticolor.

Arranged 10th to first on a cumulated “Beast Power” rating based on Strength, Repulsiveness, Special Powers, Ferocity, and Invincibility, each creature except the glowering Echidna (who resembles Patti Smith in a giant snake outfit) is posed in Chilvers’ painted scenes looming out of mist or wave, stupendous dentifrice on full display, in the midst of a ferocious attack. Peebles begins each profile with a perfunctory scenario (“A cloud of fear hung over the village. For months an Oni had been lurking by the village gates…”). She then explains how each monster was or might be defeated and identifies the culture or a literary work with which it is associated. Following a recapitulative “Rogues’ Gallery,” she closes with notes on related subjects, such as the dragon Fafnir’s cursed golden ring. Readers will find this bestiary thrilling edutainment, though they are sure to wonder how the Balinese Leyak, which are “disembodied heads propelled by the pulsating movement of their own entrails,” only come in as No. 9. The co-published Giants and Trolls (a third new volume in the series, Mighty Mutants, was not seen) offers similar draws, though Cuchulain is an odd choice for inclusion.

Hits the sweet spot between chortles and choked screams.