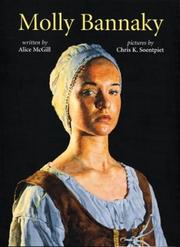 A sneeze and a cow kicking over the milk launches this true tale of a 17-year-old dairymaid in England in 1683; Molly was subsequently accused of stealing her lordship’s milk and brought before a court. Sentenced to seven years of bondage in America, she then struck out on her own, staked a claim and raised tobacco. She bought an African slave named Bannaky, who taught her about irrigation and crop rotation; when they fell in love, she freed him so that they could be legally married. Molly eventually taught her grandson, the famed Benjamin Banneker, how to read and write. McGill’s telling is fine and sure, except for an unwieldy flashback in the beginning that explains a previous spilling of milk. Soentpiet adds to the drama of the story with bold, atmospheric paintings. The problem comes in the matching of text to art; the pacing, for children, is horrible at first, with a scene of Molly facing a courtroom of stone-faced men before she has even spilled the milk (the text to gets the courtroom mid- paragraph). Later, the scene of her working for someone else with two oxen is too similar to her striking out on her own with one ox; the scene of her realizing she can’t manage on her own shows several other people working alongside her. These don’t destroy the suspense, but will compromise the accessibility of the story for children. (Picture book. 4-8)