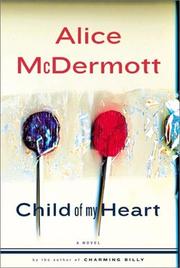 CHILD OF MY HEART

After the National Book Award–winning Charming Billy (1998), McDermott returns to the familiar turf of her earlier fiction: East Hampton and the inner life of a precocious girl one crucial summer.

Theresa lives a quietly secure life as the only child of doting, middle-aged Irish Catholic parents with upwardly mobile aspirations. By the summer she is 15, Theresa—the name’s saintly resonance may strike readers as a bit obvious—is not only lovely but wise and kind as well, adored by the young children and animals she cares for. In contrast, her eight-year-old cousin, “Poor Daisy,” is mousy, pale, and generally overlooked among a cramped houseful of siblings in Queens Village. Sorry for Daisy and also sensing a special kinship of imagination, Theresa invites the younger girl to East Hampton for the summer. Daisy arrives with pink plastic sandals she won’t take off. When Theresa stumbles across the reason—bruises on Daisy’s feet and body she can’t explain—a sense of foreboding falls like a shadow of death across the summer. But the foreboding is sexual as well. Theresa and Daisy spend most of their days babysitting the two-year-old daughter of a famous artist. When his much younger wife decamps one morning after letting Theresa know she may be the painter’s next conquest, Theresa finds herself both repulsed and attracted. Day by day, as Daisy’s health deteriorates, Theresa’s sexuality ripens. Meanwhile, the ever-observant Theresa is silent witness to the tragedies rippling under her community’s placid surface: neglected children desperate for affection; a divorced father whose longing for his children almost perverts him; the “tweedy” dowager whose overbearing cheerfulness masks maternal grief. Though hobbled by a tendency toward sentimentality and self-consciousness, McDermott sculpts her small story with a meticulous eye for the telling detail and transcendent metaphor.

We know what’s coming, but so do the characters—that’s part of this tale’s bittersweet power.