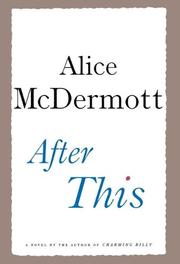 A disarmingly understated tale of mid-to-late-20th-century Long Island Catholics from McDermott, who has come to own this particular literary turf after five penetrating novels and a National Book Award.

Mary and John Keane meet in a Schrafft’s restaurant shortly after WWII, fall in love, marry and raise four children. Conventional, middle-class Catholics whose lives center on their neighborhood parish and their family, they have their quirks. Mary half-despises her “best friend” Pauline, a lonely alcoholic who plays spinster aunt to the Keane children. John names their eldest son Jacob, after a young Jewish soldier with whom he served in the war and whose death continues to haunt him. John and Mary have their differences, but their marriage is solid, while their protective, worried love for their children is palpable and real. John’s dismay that gentle, good-natured Jacob lacks the athletic or intellectual gifts of his younger brother Michael is particularly credible and well-rendered. Annie has a special connection with her mother, while youngest daughter Clare, whose emergency birth occurs at home with the help of a neighbor, forms a close bond with Pauline. As the children grow up through the ’50s and ’60s, their story ambles through disconnected, if charming, moments, like Mary’s trip with Annie to view the Pietà at the World’s Fair. When the kids reach adolescence, their lives give the narrative some forward momentum. Spunky, bookish Annie ends up in England with her British boyfriend. Jacob is killed in Vietnam. Michael becomes a teacher. Clare, a high-school senior, finds herself pregnant and decides to keep the baby. The novel closes with her wedding and the bittersweet possibilities it promises. McDermott (Child of My Heart, 2002, etc.) infuses the undulating plot with the knowledge that lives become most vivid in small moments of connection, flashlight beams (a recurring motif) illuminating the dark.

Genuinely moving yet amorphous, like a remembered fragrance that you can’t quite place.