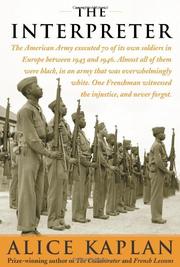 Justice for all? Not in the Jim Crow U.S. Army of WWII, as a French civilian discovered, to his horror.

Louis Guilloux, one of France’s leading novelists in the 1930s, prided himself on his knowledge of Russian literature, especially that of Tolstoy and Dostoevsky. The authors’ ironic sense of what happens when the law is badly served came to the fore when, as Kaplan (French/Duke Univ.; The Collaborator, 2000) documents, Guilloux was hired as an interpreter for and intermediary between the newly liberated people of Brittany and the Third Army under George S. Patton, who voiced concern for the “increasing number of crimes against French civilians which are being committed within the Army, particularly by service troops.” By service troops, Patton meant black GIs attached to quartermaster, ordnance and transportation companies behind the lines, and he warned that some charges, including rape, would carry the death penalty. Only hours after Patton’s warning was issued, a black GI named James Hendricks went off after a drinking bout and allegedly killed a French civilian and sexually assaulted the dead man’s wife; after a trial in which Guilloux served as interpreter, Hendricks was sentenced to die and was publicly hanged, though his family in North Carolina were told only that he died as a result of misconduct. Guilloux discerned a pattern: “The guilty were always black,” he noted, “so much so that even the stupidest of men would have ended up asking himself how it was possible that there be so much crime on one side, and so much virtue on the other.” As Kaplan demonstrates, that virtue was illusory: In one case that she closely documents, a white American officer murdered an Austrian attached to Free French forces but was readily acquitted, while black soldiers—including civil-rights martyr Emmett Till’s father—were executed for capital crimes, making up 55 of the 70 Americans thus killed in Europe from 1943 to 1946.

Kaplan illuminates some abhorrent recent history that the Army would likely prefer to forget.