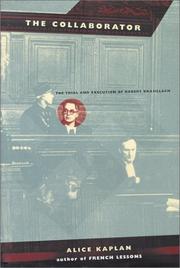 The Trial and Execution of Robert Brasillach

The riveting tale of an episode, hardly known to Americans, that continues to affect French life and politics and raises profound moral issues.

One of the most searing moments of modern French history came after the liberation of Paris in 1944. The time to settle scores—between the defeated Vichy government, together with its French collaborators, and members of the Resistance and De Gaulle's liberating army, as well as the survivors and ghosts of French Jewry—had arrived. And that moment was encapsulated in the treason trial, conviction, and execution of the mordant anti-Semitic writer and Nazi sympathizer Robert Brasillach. Kaplan (Romance Studies/Duke Univ.; French Lessons: A Memoir, 1993) focuses her resonant work on the enduring question of the responsibility of writers and intellectuals to their societies. For the French, then and still debating their responsibility for Vichy and the extermination of thousands of French Jews, the question in 1944 was whether one can commit "political treason in writing, rather than in action.'' Kaplan's study, the first based upon all available sources, successfully resolves distortions in the earlier historical record and makes clear beyond all doubt Brasillach's role in inducing others to send innocents to their graves. Equally important, she exhumes the lives and roles of Brasillach's prosecutor and defense attorney, as well as the members of the jury that convicted him. With exemplary balance, she gives all their due (although, inexcusably, there are no photos, not even of the main characters). In the end, she judges Brasillach's execution an error because his martyrdom still fuels the French far right. But surely Albert Camus, no friend of collaborators, had the stronger and more noble case: that Brasillach's death was immoral because all capital punishment is immoral.