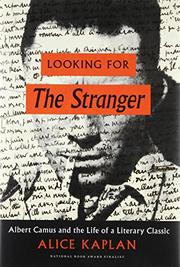 LOOKING FOR THE STRANGER

Albert Camus and the Life of a Literary Classic

Ever since its 1942 publication, The Stranger has been a murder mystery in more ways than one: we know whodunit, we just don’t know why. The narrator, Meursault, is a killer without a motive; after the unprovoked shooting of an Arab, he goes to trial offering neither remorse nor defense and awaits execution in a jail cell consoled only by his bull-headed refusal to play his designated role. In this swiftly told, deeply researched literary investigation, Kaplan (Dreaming in French: The Paris Years of Jacqueline Bouvier Kennedy, Susan Sontag, and Angela Davis, 2012, etc.) pieces together the creation of the novel, its connection to colonialism, and how it has been interpreted ever since. The plot evolved from both notebook jottings (“Story: the man who doesn’t want to justify himself”) and events Camus witnessed as a reporter in Nazi-occupied Algeria; the spare, simple style was the result of years of painstaking rewriting. The first critics noted traces of James M. Cain and Franz Kafka, and Jean-Paul Sartre saw, or imagined, only the influence of himself and wrote a critique that turned The Stranger into the book that introduced existentialism to the West. (Camus, for his part, thought the book “anti-existentialist.”) Kaplan can be overly effusive at times—it overstates the case to say the novel “would change the history of modern literature”—but she assembles the facts with astute narrative skill. She is driven by the novel’s many abiding puzzles: who or what does Meursault represent? Is he a man who finds his own solipsistic integrity in the face of an irrational universe, or is he just a callous sociopath? While she doesn’t offer any final interpretation, her detective work deepens the understanding of a work whose power resides as much in what it doesn’t say as what it does.

A compelling companion to a novel that has stayed strange.