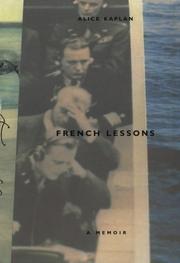 ``What do students need to know about their teachers?'' asks Kaplan (French Literature/Duke; Reproductions of Banality, 1986, etc.—not reviewed): ``How do I tell them who I am, why I read the way I do?'' Here, the author is thinking of the mysteries of her own teacher, Paul de Man—but her memoir, though artful, hasn't the intellectual force or interest of de Man's writing. There's an appealing symmetry to Kaplan's memories: Her father, who died when she was seven, prosecuted Nazi war criminals, and she grew up to confront the ``negationists,'' French intellectuals, such as Maurice Bardäche, who denied the Holocaust. And there are interesting symbols here too: her father fighting bats at their summer home; the young author, age 16, making love in a cemetery; the French language itself offering a refuge, an alternative way of looking at things, a ``home.'' Kaplan enjoyed a sheltered and favored existence: Swiss boarding school; Berkeley, with junior year abroad; Yale in the 70's, where she acquired the right accent, studied elegant writers, and debated which language to speak in and what it meant to be bilingual. The author's primary debts seem to be to men: her father; her French lover; one ``Mr. D.'' (a classmate's wealthy father, who gave her an unforgettable day in Paris); an ``Oxbridge don'' who made her ``happiness...complete'' when he quoted from her book; and de Man- -whose defense, regarding his Nazi associations, she frames in his own terms: that theory shouldn't be confused with life. The major impression Kaplan gives here is of how very interesting life can be to a French professor, especially at a time when French intellectuals dominate academic critical thought— making this enjoyable reading for Francophiles, perhaps, but not for many others.