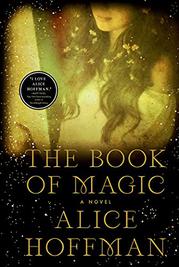 THE BOOK OF MAGIC

In the conclusion to Hoffman’s Practical Magic series, a present-day family of witches and healers wages a final battle against the curse that has plagued them since 1680.

Thanks to an ancestor’s bitter curse, anyone who's been in love with and/or been loved by an Owens family member for the last 300 years has met death and tragedy (with rare exceptions involving risks and personal sacrifice). Hoffman’s prequel, Magic Lessons (2020), detailed the origin of the curse. In this series finale, Hoffman brings the three most recent generations together: sisters Sally and Gillian, whose youthful adventures introduced the series in Practical Magic (1995); their beloved elderly aunts, Jet and Franny, and long-lost uncle Vincent, children themselves in 1960s Manhattan in Rules of Magic (2017); and Sally’s daughters, Kylie and Antonia, whom she’s shielded from knowledge of their unusual heritage and its curse. The novel opens with Jet about to die, aware she has no time to use the knowledge she’s recently gained to end the curse herself. Instead, she leaves clues that send her survivors on a circuitous path involving a mysterious book filled with magic that could be dangerous in the wrong hands. Then an accident makes the need to break the curse acute. What follows is a novel overripe with plot twists, lofty romances, and some ugly violence along with detailed magic recipes, enjoyably sly literary references, and somewhat repetitive memories of key moments from the previous volumes. While centered in the Massachusetts town where the Owens family moved in the 17th century, the novel travels to current-day England (briefly detouring to France) and becomes a battle of good versus evil. The Owens women’s greatest challenge is knowing whom to trust—or love. Hoffman strongly hints that the danger arising when someone chooses incorrectly is less a matter of magic than psychology and morality. Ultimately, for better or worse, each Owens woman must face her fear of love. For all the talk of magic, the message here is that personal courage and the capacity to love are the deepest sources of an individual’s power.

An overly rich treacle tart, sweet and flavorful but hard to get through.