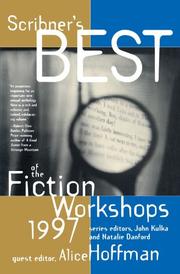 SCRIBNER'S BEST OF THE FICTION WORKSHOPS 1997

A rather depressing glimpse of things to come, culled from the rising talents of some 20 writing programs nationwide by Hoffman (Practical Magic, 1995, etc.), who blithely and somewhat terrifyingly informs us that ``what's in these pages is only the start.'' All the standard criticisms of writing-program prose—its flatness, dullness, lack of depth—are well-illustrated by the selections found here. Almost all are narrated by or from the point of view of people who are young and confused at the start and who make very little progress by the end of pieces that are, in fact, mostly portraits rather than stories. The young WASP of Lindsay Fleming's ``The Slipper'' manages to lose his father, get married, disgrace himself, and go crazy all without the least intimation of drama: His decline comes about as naturally as the winding-down of a cocktail party. In Denise Simard's ``Tallulah at Your Feet,'' a badly stalled college grad walks dogs for a living and dates a boring lout for no good reason other than loneliness and sloth; the pathetic crush she develops on a married man, offered as the climax, is described triumphantly though it seems merely desperate. The best entries tend to be the ``culture narratives''—e.g., Caroline Cheng's ``Consolation'' or Julie Rold's ``Bloodlines''- -which describe and take place within a cohesive and well-defined social milieu, the Philippines, say, or the German communities of the Midwest, more successful mainly because they're the more likely to rely upon narration, description, and plot for effect. Most of the others—like Adam Schroeder's ``The Distance Between Prague and New Orleans'' (a narcissistic actor fakes an epiphany in a cemetery)—seem to be engaging in various forms of self-absorption or self-analysis that may be good for the authors' souls but does little for their writing. Dreadfully dull and unbearably pompous. If really a foretaste of literary trends, to be read while weeping.