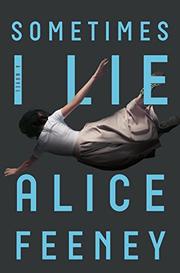 A pathological liar, a woman in a coma, a childhood diary, an imaginary friend, an evil sister—this is an unreliable-narrator novel with all the options.

"A lot of people would think I have a dream job, but nightmares are dreams too." Was it only a week ago Amber Reynolds thought her job as an assistant radio presenter was a nightmare? Now it's Dec. 26 (or Boxing Day, because we're in England), and she's lying in a hospital bed seemingly in a coma, fully conscious but unable to speak or move. We won't learn what caused her condition until the end of the book, and the journey to that revelation will be complicated by many factors. One: She doesn't remember her accident. Two: As she confesses immediately, "Sometimes I lie." Three: It's a story so complicated that even after the truth is exposed, it will take a while to get it straight in your head. As Amber lies in bed recalling the events of the week that led to her accident, several other narrative threads kick up in parallel. In the present, she's visited in her hospital room by her husband, a novelist whose affections she has come to doubt. Also her sister, with whom she shares a dark secret, and a nasty ex-boyfriend whom she ran into in the street the week before. He works as a night porter at the hospital, giving him unfortunate access to her paralyzed but not insensate body. Interwoven with these sections are portions of a diary, recounting unhappy events that happened 25 years earlier from a 9-year-old child's point of view. Feeney has loaded her maiden effort with possibilities for twists and reveals—possibly more than strictly necessary—and they hit like a hailstorm in the last third of the book. Blackmail, forgery, secret video cameras, rape, poisoning, arson, and failing to put on a seat belt all play a role.

Though the novel eventually begins to sag under the weight of all its plot elements, fans of the psychological thriller will enjoy this ambitious debut.