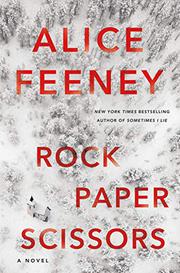 An unhappy British couple attempt to rekindle the magic with a weekend trip to a remote spot in Scotland.

How is she tricking me? Feeney, the author of Sometimes I Lie (2017) and His and Hers (2020), has trained her readers to start asking this question immediately with her puzzle-box narratives. Well, you won't find out here. Only the basics: Amelia's won a weekend getaway in an office raffle, and as the novel opens, she and her screenwriter husband, Adam, who suffers from face blindness, along with their dog, Bob, are miserably making their way through a snowstorm to a destination in the Scottish Highlands which is no Airbnb Superhost, that's for sure. A freezing cold, barely converted church with many locked rooms and malfunctioning electricity, the property also features a mysterious caretaker who has left firewood and a nice note but seems to be spying through the window. Both Adam and Amelia seem to be considering this weekend the occasion for ending the marriage by any means necessary—then Bob disappears. The narrative goes back and forth with first-person chapters by Amelia and Adam interleaved with a series of letters written to Adam on their anniversary through the years and keyed to the traditional gifts: paper, cotton, wood, leather, etc. There's also a rock and a scissors, referring to the children's game of the book title, which the couple use to make everyday decisions like "Should we stay together?" Offstage is the famous writer Henry Winter, whose novels Adam has made his fortune adapting; through several author-characters, Feeney weaves in sometimes-grim observations about the literary life. On meeting a sourpuss cashier at the rural grocery store: "The woman wore her bitterness like a badge; the kind of person who writes one-star book reviews."

This complicated gothic thriller of dueling spouses and homicidal writers is cleverly plotted and neatly tied up.