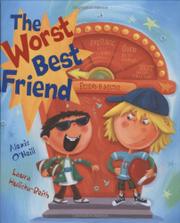 Longtime best friends Conrad and Mike do everything together: They “ate together / Read together / Played together...” Until Victor joins their class. Their new, big, bold schoolmate brags and blabs and excels at just about everything he tries. As Conrad puts it, “He—is—awesome!” Pretty soon, it’s Conrad and Victor who “walked together / Ate together / Played together— / No room for Mike.” Huliska-Beith tackles this age-old psychodrama with bright, textured illustrations that incorporate Victor’s incessant, pervasive boasting: “Me, Me, Me...Wow, Wow, Wow...Blah, Blah, Blah” swirls around him, Joe Cool sunglasses marking him as the grandstander he is. Environmental print—written details on the blackboard or book titles—adds fizz. A showdown game of kickball convinces Conrad and Mike that winning or losing has nothing to do with being best friends and that loyalty is its own reward. While there’s little new in this insight, the message bears repeating, and the delivery in this volume provides plenty of zing. The ending “high five” says it all. (Picture book. 5-8)