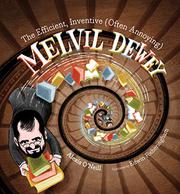 A panegyric for modern library science’s most renowned and despicable founder.

Leaving all reference to Dewey’s long history of sexual harassment and open racism and anti-Semitism confined to two sentences in the small-type afterword, O’Neill presents him as a man on a mission—obsessed with efficiency, determined “to make the biggest difference in the world in the least amount of time,” and fired up with the notion that success for this country’s immigrants hinged on free public libraries that were professionally staffed (by women, because they were capable but, wink wink, cheaper than men) and filled with materials that could actually be found. In a staccato narrative replete with boldface words in ALL-CAPS and exclamation points (“Hardworking! Determined! Visionary!” “Controlling! Demanding! Manipulative!”), the author tallies many of his achievements, from the Dewey Decimal System (given only quick mention here) and the first library school to professional associations and specialized library furniture. She also tacks on a complimentary quote from him about women…as if that would somehow make his behavior excusable. Fotheringham captures his manic sense of purpose by twice depicting a locomotive smashing through books and points to his actions’ common result by surrounding Dewey elsewhere with much smaller, uniformly White colleagues and contemporaries looking, mostly, bemused or outright peeved. “A pretty good legacy,” the author concludes, “don’t you think?” “Checkered” might be a better description. (This book was reviewed digitally with 11-by-17-inch double-page spreads viewed at 75% of actual size.)

As disingenuous a profile as ever was.