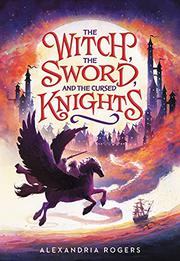 THE WITCH, THE SWORD, AND THE CURSED KNIGHTS

A fantasy in the highest tradition.

Ellie Beetlebump, 12, is enrolled in Roses and Needles Finishing School for purposes of socialization. Her sharp-tongued, highborn mother wants her to become a fairy godmother—and Ellie does too, except that she has witch blood as well as fairy blood, and witches are outcasts in Aurelia Realm. Caedmon Tuggle, also 12, lives in Wisconsin and is depressed and withdrawn over the recent inexplicable death of his best friend, Jimmy. Unable to process his grief, he speaks cruel words to his parents and little sister—words he regrets. When Ellie and Caedmon receive mysterious letters informing them they are recruits for the Knights of the Round Table and must report to Château des Chevaliers, they are puzzled. Ellie expects to attend Fairy Godmother Academy instead, and Caedmon, unaware of the existence of magical realms, thinks it’s a prank. But soon, the two find themselves with 48 other recruits at the Château, where they become friends. Knight training begins, but it’s clear there’s a grave evil threatening all the realms, magical and nonmagical. The intricate plot incorporates references to Arthurian legend as it ultimately builds its own original story. Ellie and Caedmon are perfectly drawn as insecure but determined protagonists, and the story’s themes of courage, friendship, hope, and self-acceptance freshly resonate. Main characters read as White.

An engaging and intelligent fantasy: up there with the best of them.