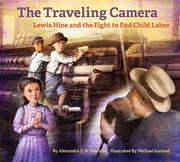 Lewis Hine and the Fight To End Child Labor

A tribute to the self-taught photographer who sparked real reform by turning faceless masses of abused workers into children with names and histories.

Incorporating Hine’s voice and some of his actual words (signaled with italics) into her free-verse monologue, Hinrichs highlights both his purposes—“I want to show their hard work / their hard lives” and also “their spirit. Because / the human spirit / is the big thing / after all”—and his methods of getting past suspicious factory overseers and of connecting with child workers in settings from cranberry bogs and canneries to coal mines. Garland’s harmoniously toned painted images of a slender, deceptively inoffensive-looking White figure using an awkward box camera to take pictures of solemn children, most but not all White, with downcast eyes and patchy period clothes meld gradually toward the end into Hine’s actual work (he called them “Hineographs”). More than 30 in all, they appear in a gallery that goes to the rear endpapers and are accompanied by a prose recap that downplays but at least mentions his quaint views on gender roles plus the fact that he took relatively few pictures of Black children and almost none of Asians. Russell Freedman’s Kids At Work (1994) explores his life and legacy in greater detail, but there’s enough here to leave even younger readers moved by his mission and his timeless portraits.

A searching picture of a pioneering social crusader.