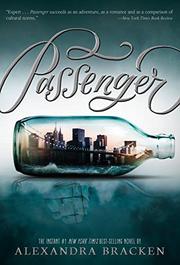 From the Passenger series, volume 1

A dedicated violinist finds her life taking a different turn when she learns that she is a time traveler in this series opener.

Etta is 17 and ready to make her musical debut near her home in New York City when she finds herself suddenly catapulted onto a sailing ship in 1776. With her is Sophia, a rival time traveler who explains that the ability runs in families. Etta soon learns that her mother has hidden, somewhere in time, a valuable and dangerous object that, in the wrong hands, could cause catastrophic damage to time. Sadly, Etta herself falls into the wrong hands but agrees to try to find the object, following clues her mother left through time. Fortunately, Nicholas, a biracial former slave, also has the ability, and he joins Etta—but is he working with her or against her? Never mind his motive, however, because the two eventually fall in love. Bracken keeps pages turning with her descriptions of the different destinations the couple explores, including 1940 London and 1685 Angkor. Nicholas, a sailor who dreams of owning his own ship, speaks modern English perhaps too well, but his reactions to technology such as electricity and buses ring fairly true. The author places more focus on suspense than on romance, which she develops slowly. Already lengthy, the book ends with a cliffhanger and clearly more to come.

Long but intriguing, and sometimes exciting—the payoff is in the future.