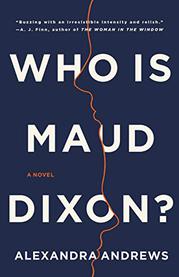 WHO IS MAUD DIXON?

An ambitious aspiring writer gets a dream job working for her favorite author.

Andrews' devilishly clever debut opens at a publishing-house holiday party in a New York bar where editorial assistant Florence Darrow and her colleagues are debating "the question asked in countless magazine articles, online forums, and publishing lunches all over town": Who is the author behind the pseudonym Maud Dixon? Someone says they've heard it's a man! As one of the millions of fans of Dixon's debut novel, Mississippi Foxtrot, Florence dismisses the importance of the author's gender. "She knew that, whoever she was, she was an outsider, like Florence herself." Later that night, Florence ends up in a hotel with her editorial director, who happens to be married to a famous actress. "He must have known," Florence later muses, "that sleeping with a young assistant who worked for him had the potential to destroy both his career and his family." But when Florence tries to parlay their connection into a book deal, it is she who ends up losing her job. Oddly, though, she's not worried about being broke and jobless—she's sure the universe is watching out for her. And she may be right, because two weeks later she's asked to apply for a job as personal assistant to Maud Dixon herself. This delightful publishing satire continues for about half the book, and just when you're thinking "Didn't they say this was a thriller?" the wild suspense plot kicks in. The story leaps from an isolated estate outside Hudson, New York, to the dusty medinas and towering cliffs of Morocco, and here the comparisons to The Talented Mr. Ripley start to make sense. At every diabolical twist and turn, Andrews' impish sense of humor peeks around the corner to jack up the fun.