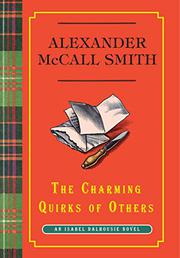 THE CHARMING QUIRKS OF OTHERS

Harold Slade, principal of the Bishop Forbes School, is leaving for a post in Singapore, and the school’s board of governors, headed by retired businessman Alex Mackinlay, has prepared a short list of three possible replacements: mountain-climbing enthusiast John Fraser, ambitious math teacher Gordon Leafers and Tom Simpson, who Mackinlay thinks none too bright. It’s all business as usual until someone complicates the process by writing an anonymous letter warning that one of the three finalists harbors a secret that would seriously embarrass the school if he were appointed. What to do? Naturally, Mackinlay’s wife Jillian takes it upon herself to enlist the help of Isabel, a casual acquaintance she met at a dinner party. It’s an inspired choice, because in addition to her gift for moral clarity and fierce integrity, Isabel turns out to have surprisingly intimate connections to two of the candidates. Along the way, she’ll have to deal with her fiancé Jamie’s temptation by dying cellist Prue McKay, her niece Cat’s latest problematic boyfriend, her plan to bid on a Raeburn canvas picturing a long-dead relative and, of course, the latest schemes of Professors Robert Lettuce and Christopher Dove, the banes of Isabel’s journal, the Review of Applied Ethics. This time, however, the mystery of the anonymous letter remains central until Isabel resolves it in an uncommonly satisfying way.

A powerful demonstration of Smith’s ability to dramatize the ways everyday situations spawn the ethical dilemmas that keep philosophers in business.