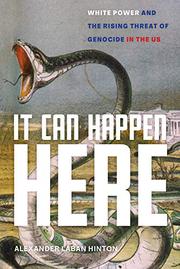 IT CAN HAPPEN HERE

White Power and the Rising Threat of Genocide in the US

A deeply relevant study of genocidal motivation and manifestation in America.

Rutgers anthropologist Hinton offers deep instruction for anyone seeking to better understand the bigotry that permeates American society. As the founder and director of the Center for the Study of Genocide and Human Rights and an expert witness in the prosecution of Khmer Rouge ideologue Nuon Chea, who was convicted of genocide in the international tribunal in Cambodia in 2018, the author is well situated to investigate the topic. Structuring the narrative around his college seminars, he uses as a point of departure the 1935 bestseller by Sinclair Lewis, It Can’t Happen Here, which focused on a populist demagogue who advanced bigoted, dictatorial themes, just as Trump did decades later. Hinton is deeply concerned with the idea of why people hate and how that hate plays out publicly. The violent Unite the Right rally in Charlottesville, Virginia, in 2017 plays a large role in this work, as the author shows how previously hidden White supremacist ideologies came to the fore. Hinton shows how these “ruptures” are simply one element of a long-standing systemic problem that Trump flushed into the open. “His presidency,” writes the author, “was a symptom of a long and enduring history of systemic white power in the United States, one filled with moments in which genocide and mass violence took place.” In addition to contextual background, Hinton moves methodically through specific White supremacist texts. As a committed teacher in the Socratic method, the author continually teases out answers from his intelligent, engaged students, who recognize that “it” has already happened here, many times over—from Native genocide to slavery to Jim Crow to the recent proliferation of White supremacy. As the author closes his well-researched, readable account in July 2020, one only wishes he could have included a section on the violent acts of Jan 6, 2021.

A tremendously timely and important study of the rhetoric of hatred in our times.