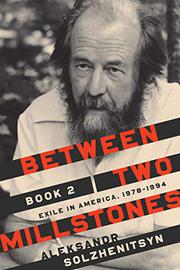 The second part of Solzhenitsyn's memoir of his time in the West, before he returned to Russia in 1994.

The author delineates his idyllic time in rural Vermont, where he had the freedom to work, spend time with his family, and wage a war of ideas against the Soviet Union and other detractors from afar. At his quiet retreat with Natalia, his wife and intellectual partner, and three sons, the Nobel laureate found what scholar Daniel J. Mahoney describes as “a happiness in free and uninterrupted work—conditions he could only dream of during the years of repression and harassment in the Soviet Union chronicled in The Oak and the Calf, perhaps the greatest of his literary memoirs.” While Book 1 was devoted mostly to “speeches and interventions,” these pieces demonstrate Solzhenitsyn’s deep research and engagement in his life's work, as he struggled to navigate the "millstones" of criticism against his historical assessments of the Russian Revolution. One of his translators even criticized him for anti-Semitism and for “romanticizing prerevolutionary days and urging a return to the orthodox beliefs and chauvinistic traditions of the past,” all of which the author addresses in his sage, deliberative way. Solzhenitsyn's experiences in the gulags led to the further development of his philosophical Christian beliefs, and he never shied away from his condemnations of Bolshevism, Communism, and the Soviet system as destructive to the "historical Russia." As he writes, “during my twenty years of exile the Communist government has never tired of sullying my name either—indefatigably, in every way, and at every opportunity.” Whether he is chronicling his assistance to others caught up in the oppressive Soviet society, engaging in an ongoing dialogue with fellow dissident Andrei Sakharov, or responding to the "blowing hot and cold" developments from the Soviet Union, the author leaves a riveting record of his work in the West,