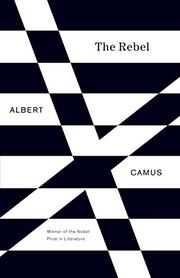 AN ESSAY ON MAN IN REVOLT

Albert Camus, esteemed author of The Plague, The Stranger, and other works outstanding in the contemporary literary scene, clarifies and expands his philosophy in an essay which is at least as literary as it is philosophical. Camus attempts to understand this era through exploring the act of rebellion, and draws from his outlay of historical landmarks a provisional hypothesis which he feels accounts partly for the direction and almost wholly for the frenzy of our time. The history of metaphysical and political revolt, the one a rebellion against creation and the human condition and for order, the other of the slave against the master, merge in our time in the nihilistic Russian revolution and Hitler regime. M. Camus reviews the histories of these movements with a brilliant and fertile interpretation of the concepts of the Marquis de Sade, Baudelaire and the Dandys, Dostolevsky, Nietzsche, Hegel, Marx, and others. He conceives of revolt as an essentially positive act, at once against and for something. Through it man is preparing a renaissance beyond the limits of nihilism. Man's hope lies in the rebel who revolts in the name of moderation and life, who joins through his act in the common fate, who tempers his revolt with a restraint that leads away from the vicious circling to successive dictatorships. This exploration into nihilism and rebellion in which Camus spins the globe of ideas to point out new and stimulating areas of thought will be appreciated by the literary and intellectual as an expression of contemporary thought in the world of letters on the world at large.