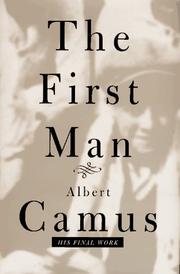 A voice we thought we'd never hear again speaks out with plangency and clarity in this unfinished novel, found in the wreckage of the car in which its Nobel Prize—winning author perished in 1960. As we learn in an Editor's Note contributed by Catherine Camus, her father's first-draft manuscript was withheld from publication following his death for fear that its inchoate state would be savaged by Camus's literary enemies and rivals, notably Jean-Paul Sartre. Perhaps; but it's hard to believe any reader could have been blind to the work's distinctive merits: vivid impressionistic descriptions of its autobiographical protagonist's childhood and youth in Algeria; a deeply empathetic portrayal of young Jacques Cormery's "ravenous appetite for life...[and] untamed and hungry intellect"; and incisive characterizations of such beloved family members as Jacques's steely paternal grandmother, volatile Uncle Ernest, and beautiful, illiterate, sorrowful mother, grieving all her life—as will Jacques himself—for her young husband, who died at the Marne in WW I. In the most moving sequence, Camus describes Jacques's surprised empowerment by a dedicated teacher, M. Bernard, who fought in that war and acknowledges his special responsibility to students who lost their fathers to it ("I try at least here to take the place of my dead comrades"). Of course, the whole is frustratingly fragmented, unpolished; long unbroken paragraphs dominate, inconsistencies in detail crop up often, and Camus's notes and preliminary sketches are lumped both into footnotes and an extended Appendix. Still, the very incompleteness of the work validates its power: In one heart-stopping sentence, Jacques's mother is identified as "Widow Camus." All honor to Catherine Camus for offering us this invaluable glimpse into the life and art of a writer who may have been greater than we knew then or can know even now.