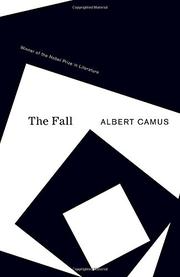 An utterly fascinating book that might with half-truth be called a novel, or a monologue, or a character sketch, but which is largely a philosophical thesis, and inquiry- bristling with wit. "The Fall" is of course the fall of the angels, recorded satanically by Jean-Baptiste Clemence, a former Parts lawyer now following the self-invented vocation of judge- penitent in Amsterdam. He records his change from a most worthy defender of widows and orphans and other "noble" causes, and from a lover of the good things in life, to an associate of thieves, murderers and panderers in the dive where he now makes his headquarters, devoting himself to the conversion of others to his view of life. His progress is both fantastic and quite logical, both full of suspense and paradox. It does not constitute a novel, but rather a metaphysical search in a barely fictional form. It will have a purely intellectual appeal- its implications as well as its references and its analogies are recondite. But if in this case, Camus is the devil- his translator Justin O'Brien is a brilliant advocate.